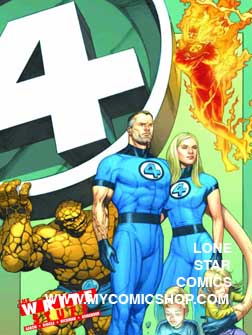 When I saw the cover for Fantastic Four #570, with the new creative team of Jonathon Hickman and Dale Eaglesham, I was more than a bit put-out by what I saw — namely a ripply-muscled Reed Richards in short sleeves. Hair on the arms… five-o’clock shadwo… everything that our pliable Plato is not.

Having read the issue, I’m a little bit relieved. And, honestly, given the nature of the recent Dr. Doom arc, I really should have surmised it sooner.

It seems as if there is an extra-dimension League of Reeds that meets to solve crises across reality. It’s really kind of a neat idea. I mean, if you had the choice to work with nobody but carbon-copies of yourself… what could be better than that? 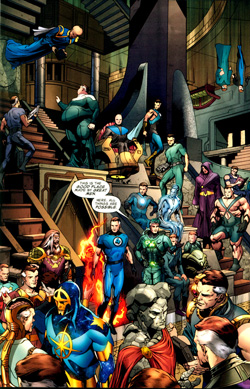 Of course, these copies are less than “carbon.” All of the Reeds in the All-Reed Squad are products of their unique dimensions (click on the thumbnail to the right for a larger view). Some aren’t even stretchy — exhibiting instead traits of one of the other Four.

Which means, in my opinion, that this Reed — the ‘roid Reed with the biceps and the chest and the body hair and everything — is not our Reed. He’s some other Reed.

But he’s a Reed that is going to play a crucial role (most likely alongside or against Real Reed) in the story to come. 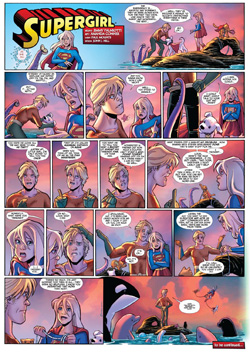 Last Friday’s edition of the Philadelphia Inquirer had an advance obituary of sorts. It was a story about how a comic like the lushly illustrated serial strip, Hal Foster’s Prince Valiant, just can’t survive in today’s newspaper climate. From the story:

“The strip demands enough space to accommodate its sweep and detail, but to cut costs, many newspapers have reduced the size available from the full page of its prime to a half, quarter, or even smaller part of a page.”

Which makes the success of DC Comics’ Wednesday Comics so perplexing. In case you’re not familiar, Wednesday Comics is printed in the form of a Sunday funnies section. It’s printed on full broadsheet newsprint — about 14-by-20 inches. (Click on the image to the right for sample) And it’s nothing but page-after-page of full-page, standalone comics. One page is a Superman story, the next is a Metamorpho saga. All are continued next week.

And it’s one of the hottest things in comics right now. Heck, there’s even one title, Kamandi that is a devoted homage to Foster’s style of storytelling.

Perplexing, I tell ya. I can’t figure it out. Maybe DC is using special ink. I mean, they get my #3.99 every week for the thing. And that’s twice what I pay for an entire Sunday paper. 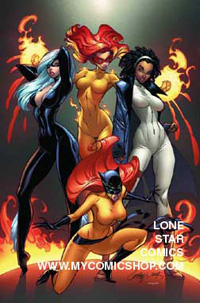 Having read the first two issues of Marvel Divas, I have to say that my primary complaint is that they’re too flat.

These characters are almost devoid of any depth whatsoever. I know this was supposed to be a Marvel take on Sex in the City, but you know what made that show good? The four characters had discernible personalities. And each personality could play off of any other (or others) and lead to interesting dialogue.

It wasn’t particularly original — Golden Girls was done years earlier (and done better — exponentially better — for my taste). It’s a tried-and true formula for the genre.

Aside from a “girlfriend…” thrown into the dialogue, there’s absolutely nothing to separate this from any standard-issue comic story.

(By the way… does anyone — anyone — actually pepper their everyday dialogue with “girl…” or “girlfriend…”?)

It’s a shame, because, judging from the cover, at least, we were promised anything but flat.

Which brings us to the art and… more flatness.

I’m talking, of course, about the tremendous deficiency in the way these chacacters are drawn…

These people have no noses! None of ’em do! (Go ahead… click on the image above for a full page.) It really started to bother me about ten-or-eleven panels into the story — everyone’s face is as flat as a shovel. Nostrils they got. Noses they lack. It was one of those things that, once I noticed it, it started to creep me out big-time. I like my characters to have noses. I’m just that way. If you wimp out on drawing noses, you wind up with aliens.

So, I’m ditching this book two issues in. I was promised a sizzling-hot “Sex in the City” take on the Marvel Universe. But what I got fell flat.

It’s as plain as the nose off your face.