It’s been a while since my regularly scheduled look at comics from the black-cape perspective, so let’s catch up with a quick lightning round. 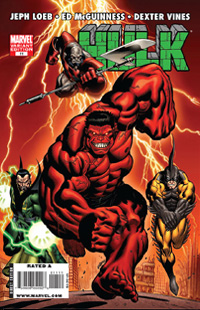 — Hulk 10-12: The three-issue “Defenders vs. Offenders” arc is at its mid-way point, with some very nice surprises. Match-ups between Silver Surfer/Tarrax; Namor/Tigershark and Dr. Strange/Baron Mordo have been interrupted by the Psycho-Man, Dormammu and Galactus (respectively). And the issue ends with Red Hulk hoisting Hulk on the end of a spear.

Every story involving the Grandmaster follows a recognizable pattern, and this one is no different. But the Offenders/Defenders hook is strong enough to surpass that trope. And the art team of Ed McGuinness and Dexter Vines makes this a truly enjoyable read. And major props to the Comicraft lettering for deft touches throughout (for example, the introductions of Dormamuu and Psych-Man). 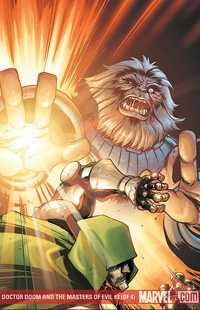 — Dr. Doom and the Masters of Evil: Maybe it’s because my six-year-old and I are on our third tour through Marvel Ultimate Alliance for Wii, but the idea of Doom leading the Masters of Evil really works for me. The art certainly doesn’t hurt. It’s loose and expressive without being cartoony. In the story, Doom is on another Conquest, and enlists the aid of Enchantress, Executioner, Baron Zemo, Melter, Radioactive Man and Princess Python (from the Circus of Evil, no less) to assist him.

Spider sense says to keep an eye on Princess Python. She’s a C-lister at best. Hanging with thugs of this caliber is definitely not her style. If Doom doesn’t have something amazing planned for her, odds or series writer Paul Tobin does.

— Green Lantern: Meanwhile, in the DCU, Agent Orange has become the newest addition to the disturbingly Care-Bearsesque Green Lantern continuity. All of the Orange Lanterns use the emotion of greed to power their rings.

For those of you scoring at home, its:

And of course, the Black Lantern sage is planned for this summer.

Smart money is on the Black Lantern wiping out most or all of the other-hued Lanterns, leaving only the green and a few yellow. This will force DC writers to eschew colors altogether in future storylines and focus on texture.

All hail the Tweed Lanterns.

Although the art is definitely not my taste, the story has some real potential, with Alan “Green Lantern” Scott and the Demon Etrigan playing pivotal roles in saving the monster from himself.

If a Grundy/Bizarro clash wasn’t enough to ignite major buzz around this title, I don’t know what it’s gonna take. But it’s worth keeping on your pull list, just in case.